As a Controlled Hazardous Waste and Dangerous Good, used lead acid batteries (ULAB) must be stored, handled and transported in accordance with a range of Western Australian and Federal regulations. Many companies are unaware of all the regulatory requirements controlling used batteries and the “Chain of Responsibility” laws which can make Companies and its Executives liable.

Battery Rescue has prepared a simple checklist of the key WA regulatory requirements for used lead acid batteries, which you can download here;

The cited regulations apply to both new & used lead acid batteries, except for the Controlled Waste requirements that apply to used batteries only.

If you are looking for a “regulation compliant”, safe and environmentally sustainable battery collection and recycling service, please visit our home page

What Are The Packaging Requirements For Lead Acid Batteries (New & Used)?

As a Dangerous Good, the transportation of Used Lead Acid Batteries by either road or rail within Australia is regulated by the “Australian Code for the transportation of Dangerous Goods (ADG Code)”. The Packaging Requirements for new and used lead acid batteries are contained in the ADG Code’s P801 Packing Instruction. The Australian Battery Recycling Initiative published the following “Guidance for packing used lead acid batteries for recycling“, in 2017 which is recommended best practices, when using wood pallets to transport used batteries.

If you are using wood pallets, referred to as an overpack in the ADG Code, then your packaged automotive batteries should appear like the example below; 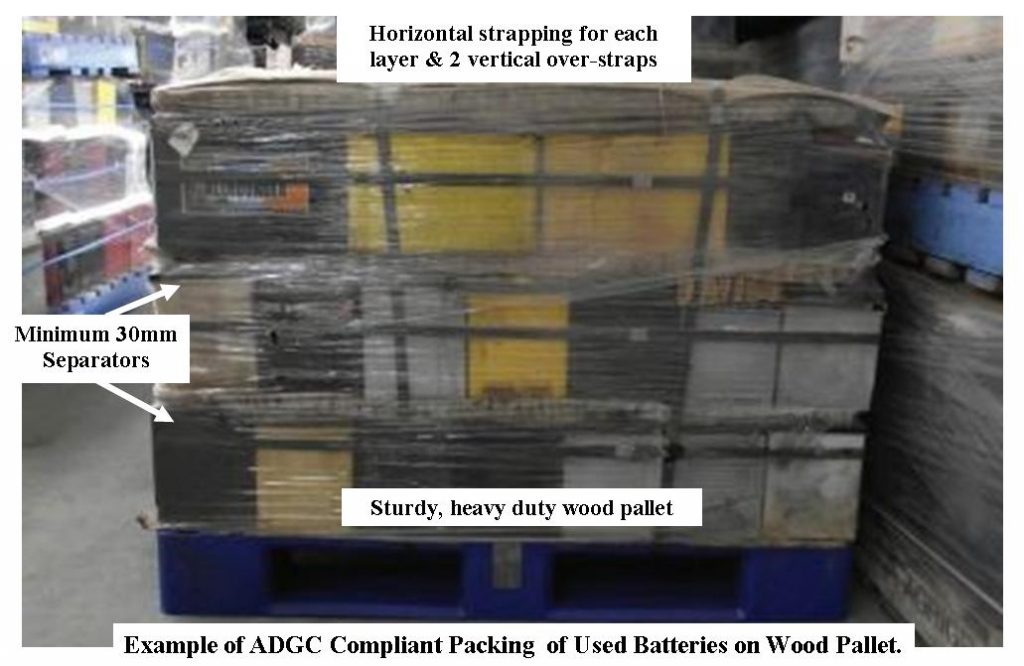 The P801 Packing Instruction is being reviewed by the UN Committee for Dangerous Goods in December 2017, with the view to clarify some ambiguity in the current wording. These changes if passed will possible be updated in future versions of the ADG Code.

Below is a summary of some of the used battery regulations that are commonly not met by Used Battery Generators;

2. Used Battery Transportation Regulations
The transportation of used lead acid batteries is regulated by the “WA Environmental Protection (Controlled Waste) Regulations 2004”, the “WA Dangerous Goods Safety (Road and Rail Transport of Non-explosives) Regulations 2007”, the “Australian Code for the Transport of Dangerous Goods by Rail and Road” and “WA Road Traffic (Vehicles) Act 2012”. Used Battery Generators engaging a Battery Collector or Scrap Metal Company have a “Chain of Responsibility” to ensure the used batteries are transported in accordance to these regulations. Common examples of non-compliance, include;

The introduction of the “Chain Of Responsibility” provisions into the WA Road Transport Laws means that Companies and their Executives can be deemed liable, if they are unable to demonstrate that they have taken all reasonable steps to prevent a breach.

1. “Australian Code for the transportation of Dangerous Goods By Road and Rail, edition 7.5” (ADG Code). The WA Department of Mines & Petroleum are responsible for administering the ADG Code. See Chapter 4.1.4 for a list of Packing Instructions including P801 for batteries, Chapter 5.2 for Marking & Labeling requirements for Packages, Chapter 5.3 Placarding and Marking of Transport Units and Part 8 for Stowage & Restraint requirements.

2. “WA Dangerous Goods Safety (Road and Rail Transport of Non-explosives) Regulations 2007” which among other things, gives effect to the standards, requirements and procedures of the ADG Code as to how they apply to the transport of dangerous goods by road or rail in Western Australia. Administered by the WA Department of Mines & Petroleum.

5. “WA Environmental Protection (Controlled Waste) Regulations 2004” regulates the storage and transportation of Hazardous Waste and is administered by the Department of Environmental Regulations.

6. “WA Environmental Protection (Unauthorised Discharge) Regulations 2004” regulates the discharge of hazardous substances into the environment.   The regulations are administered by local government councils.

7. “WA Occupational Safety and Health Regulations 1996”  which cover used battery related safety issues such as “Risk from exposure to hazardous substances” and “Manual Handling”. The “WA OSH Regulations” are regulated by WorkSafe WA.

8. Australian Standard for Storing & Handling Corrosives 3780:2008 – This publication can be purchased from a number of online providers. Section 2 deals with provisions for Minor Storage, which applies if the combined volume of acid contained by the batteries is less than 1000L.

The Australian Battery Recycling Initiative (ABRI), has published several useful documents outlining the regulatory requirements and “best practice” recommendations. You can download a copy of their publications below;

The Australian Battery Recycling Initiative (ABRI) has been formed by a group of battery manufacturers, recyclers, retailers, government bodies and environment groups to promote the collection, recycling and safe disposal of all batteries in Australia.